Dracula and his friends try to bring out the monster in his half human, half vampire grandson in order to keep Mavis from leaving the hotel. The Drac pack is back for an all-new monster comedy adventure in Sony Pictures Animation's Hotel Transylvania 2! Everything seems to be changing for the better at Hotel Transylvania... Dracula's rigid monster-only hotel policy has finally relaxed, opening up its doors to human guests. But behind closed coffins, Drac is worried that his adorable half-human, half-vampire grandson, Dennis, isn't showing signs of being a vampire. So while Mavis is busy visiting her human in-laws with Johnny - and in for a major cultural shock of her own - "Vampa" Drac enlists his friends Frank, Murray, Wayne and Griffin to put Dennis through a "monster-in-training" boot camp. But little do they know that Drac's grumpy and very old, old, old school dad Vlad is about to pay a family visit to the hotel. And when Vlad finds out that his great-grandson is not a pure blood - and humans are now welcome at Hotel Transylvania - things are going to get batty! An alien on the run from his own people makes friends with a girl. He tries to help her on her quest, but can be an interference. When Oh, a loveable misfit from another planet, lands on Earth and finds himself on the run from his own people, he forms an unlikely friendship with an adventurous girl named Tip who is on a quest of her own. Through a series of comic adventures with Tip, Oh comes to understand that being different and making mistakes is all part of being human. And while he changes her planet and she changes his world, they discover the true meaning of the word HOME. 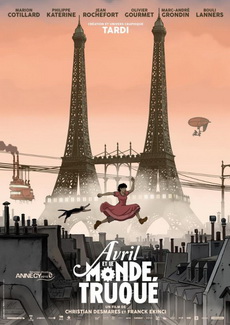 1941. France asleep in the nineteenth century, governed by steam and Napoleon V, where scientists vanish mysteriously. Avril (Marion Cotillard), a teenage girl, goes in search of her missing scientist parents. - In 1941, the world is radically different from the one we know from history books. Geopolitics has developed strangely: Napoleon V rules France and, for the last 70 years, scholars have been mysteriously disappearing, depriving mankind of their inventions. Without radio, television, electricity, aviation, and the combustion engine, the world is mired in outdated technology, dozing in the previous century's knowhow dominated by coal and steam. In this bizarre universe, Avril (Marion Cotillard), a teenage girl, Darwin (Philippe Katerine), her talking cat, Pops (Jean Rochefort), her grandfather, and Julius (Marc-André Grondin), a young scoundrel and police informer, go off in search of Avril's parents, two of the missing scientists. The quartet will face many dangers and mysteries in this strange new Rigged World. For unknown reasons, the Earth's ionosphere has weakened dramatically during the course of the last century. All animal and plant species perished decades ago. All that remains is one small group of humans who attempt to resist the hostility and hardness of the external environment from SUMER, the last hive city in the world. A young boy, Hermes, lives alone close to the wall that delimits the city, an area that is highly guarded by the SSW (SUMER Security Watchers). While observing the desert from the roof of a building, Hermes suddenly sees something that looks a lot like a blue feather floating in the air... Tentacles once again captured the world and the fate of the whole world was in the hands of the young heroines of the series. Based on the erotic manga by Suzu Suzuhane. Girls exterminating the creatures of hell! The plot is surreal enough - it combines a classic macho-shojo and not an obsessional detective. The focus of the girl or, more precisely, the girl-sorceress with the big tits that are fighting against the tentacle monsters, and of course they themselves are raped. Karen and Mizuki are magical Utea girls who protect the globe from evil aliens. How can they go about doing that? By permitting the beasts fuck their brains out of course!