A mermaid princess makes a Faustian bargain with an unscrupulous sea-witch in order to meet a human prince on land. In Disney's beguiling animated romp, rebellious 16-year-old mermaid Ariel is fascinated with life on land. On one of her visits to the surface, which are forbidden by her controlling father, King Triton, she falls for a human prince. Determined to be with her new love, Ariel makes a dangerous deal with the sea witch Ursula to become human for three days. But when plans go awry for the star-crossed lovers, the king must make the ultimate sacrifice for his daughter. Two mice of the Rescue Aid Society search for a little girl kidnapped by unscrupulous treasure hunters. When a bottle containing a plea for help from a little girl named Penny makes its way to the Rescue Aid Society, a mouse organization in the basement of the United Nations building dedicated to the rescue and well-being of anyone in need, it is up to the brave mouse Miss Bianca and her chosen partner, the shy janitor Bernard, to rescue the girl. Searching for clues at Penny's home at Morningside Orphanage in New York City, the two mice discover that the girl has been kidnapped by the evil pawn shop owner Madame Medusa and her companion Mr. Snoops. On the back of Orville the albatross, Miss Bianca and Bernard travel to the terrifyingly gloomy Devil's Bayou where they learn the shocking truth: the innocent young girl is being forced down into a dangerous, dark underground pirate's cave where she must find the Devil's Eye, the world's largest diamond and Madame Medusa's greatest obsession. Before returning safely home, Miss Bianca, Bernard, and Penny will have to combat Madame Medusa's ... A collection of animated shorts based on the stories and characters by A. A. Milne. Pooh, a bear of very little brain, and all his friends in the Hundred Acre Wood sing their way through adventures that encompass honey, bees, bouncing, balloons, Eeyore's birthday, floods, and Pooh sticks. The Many Adventures of Winnie the Pooh is a 1977 American animated buddy musical comedy film produced by Walt Disney Productions and distributed by Buena Vista Distribution. It is the 22nd Disney animated feature film and was first released on March 11, 1977 on a double bill with The Littlest Horse Thieves. Its characters have spawned an industry of sequels, television programs, clothing, books, and toys, and also inspired an attraction of the same name at Disneyland, Walt Disney World, and Hong Kong Disneyland. A much more elaborate attraction, also based on the film, opened in Tokyo Disneyland as "Pooh's Hunny Hunt". Two childhood friends find themselves forced to become enemies. When an adopted fox and a to-be hunting hound become inspepearable friends as pups, their friendship grows stronger every day in their "childhood." But as they grow older, they grow farther and farther apart, to the day when the two old comrades bond is put the ultimate test. 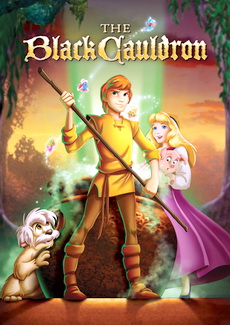 A young boy and a bunch of misfit friends embark on a quest to find a dark magic item of ultimate power before a diabolical tyrant can. Centuries ago, in the land of Prydain, a young man named Taran is given the task of protecting Hen Wen, a magical oracular pig, who knows the location of the mystical black cauldron. This is not an easy task, for The Evil Horned King will stop at nothing to get the cauldron.