The Pet Pals are back in a new exciting adventure which sees them up against their arch-nemesis Crow Witch. The Pet Pals live in Puff, better known as Windland: a small town where everything, absolutely everything, works thanks to the power of the wind. The evil Crow Witch is determined to get hold of the Spinwheel which generates the wind, and in doing so take control of the town. Will Crow Witch's diabolical machines be enough to defeat the Pet Pals? A family film filled with action and with numerous moments in which the audience is invited to take an active role, with fantastic characters and hilarious gags, to highlight the importance of renewable energy sources using humour and adventure. Pet Pals: Marco Polo's Code - In the splendid setting of Venice, the six Pet Pals will come up against an old acquaintance of theirs, the evil Crow Witch, who is determined to drain the canals of the city. Magic, cunning, team spirit and the discovery of a mysterious palace submerged beneath the Rialto bridge, are the key elements of a sure cinematographic hit! 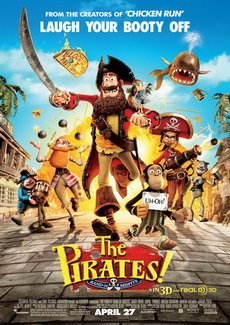 The Pirates! In an Adventure with Scientists! - Pirate Captain sets out on a mission to defeat his rivals Black Bellamy and Cutlass Liz for the Pirate of the year Award. The quest takes Captain and his crew from the shores of Blood Island to the foggy streets of Victorian London. - After years of humiliation and failed attempts to win the coveted Pirate of the Year Award, Pirate Captain and his oddball crew take on the cream of the pirating crop - Black Bellamy, Peg Leg Hastings and Cutlass Liz - in a race to pillage the most booty. They soon cross paths with lovelorn scientist Charles Darwin, who persuades the Captain that the crew's prized 'parrot', Polly, could be the answer to the 'untold riches' they are searching for. Their adventure takes them to Victorian London where they meet Darwin's sidekick 'man-panzee' Mister Bobo, and the notorious pirate-hating Queen Victoria herself. It soon unfolds that Darwin's motives for helping the crew are not what they seem, and the Queen has an evil hidden agenda of her own. The Pirate Captain must choose between basking in the glory of being crowned Pirate of the Year, or staying faithful to his trusted crew. When a cocky industrialist's efforts to raise an ancient Chinese temple leads him to be seriously wounded and captured by enemy forces, he must use his ideas for a revolutionary power armor in order to fight back as a superhero. - Billionaire inventor Tony Stark digs up far more than he bargained for. He unleashes an age-old prophecy that foretells the resurrection of the Mandarin, the emperor of China's darkest and most violent dynasty. When his best friend James "Rhodey" Rhodes has been kidnapped, Tony travels to China to investigate, he is captured and badly injured by the Jade Dragons, his life only saved thanks to a Chinese shaman and Rhodes' skills as an army medic after a piece of shrapnel damages his heart. In order to confront the destructive force in this ultimate battle, Tony creates an armored suit infused with high-tech weaponry. To stop the evil that he himself has raised form the earth, Tony must become his greatest invention ever which becomes known as "Iron Man"! The newly born champion must travel to the four corners of the earth to battle the Mandarin's henchmen, the Elementals four magical warriors who harness the power of the elements earth, water, wind, and fire with deadly chemistry. 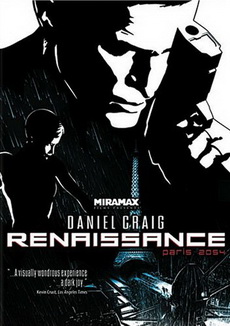 In 2054, Paris is a labyrinth where all movement is monitored and recorded. Casting a shadow over everything is the city's largest company, Avalon, which insinuates itself into every aspect of contemporary life to sell its primary export youth and beauty. In this world of stark contrasts and rigid laws the populace is kept in line and accounted for. - Paris, 2054: a dark motion-captured world of shadows and right angles. Ilona Tasuiev, a brilliant young scientist, is kidnapped, and her employer, Avalon, a major health and beauty corporation, wants her found. Karas, a jaded police captain, is assigned to find her, fast. He seeks help from her sister, Bislane, and they are soon uncovering identify theft, missing files, and hints that something back in 2006 may explain what's going on. Ilona's mentor, Avalon's vice president, a Japanese researcher, an underworld boss, and Bislane's drug connection all figure in the mix. So does an attraction between Karas and Bislane. What's behind the kidnapping? Who's the victim? In the distant future, Earth is occupied by ancient gods and genetically altered humans. When a god is sentenced to death he seeks a new human host and a woman to bear his child. - This movie is set in the year 2095, hence the presence of mutant humans and extraterrestrials. The main character is known as Jill. She is not human. When she is discovered by Dr. Elma Turner she is diagnosed as being the most interesting genetic test subject Turner has ever come across. Her organs are not in the right place, she has no memory and her internal biological age appears to be only three months old. Turner gives her a break, giving her an identity card and a place to stay, in exchange for Jill being her guinea-pig to work on and discover more about. Nicopol is a frozen prisoner who is due to be released a year after the film is set. There is a problem in the frozen prisoners' ward and several are thrown down to the ground(dying in the process), including Nicopol, but he lives and only loses a leg. There is a lot more to this story but I can't disclose it in this summary; I don't have the words. An urbane fox cannot resist returning to his farm raiding ways and then must help his community survive the farmers' retaliation. It is the story of one Mr. Fox and his wild-ways of hen heckling, turkey taking and cider sipping, nocturnal, instinctive adventures. He has to put his wild days behind him and do what fathers do best: be responsible. He is too rebellious. He is too wild. He is going to try "just one more raid" on the three nastiest, meanest farmers that are Boggis, Bunce and Bean. It is a tale of crossing the line of family responsibilities and midnight adventure and the friendships and awakenings of this country life that is inhabited by Fantastic Mr. Fox and his friends. The gang goes on a trip to check on Velma's younger sister, Madelyn. She's been studying stage magic at the Whirlen Merlin Magic Academy, where apparently there have been sightings of a giant griffin. The gang decides to investigate. Everybody's favorite canine detective is back again. The Scooby Gang still seem fresh and vibrant in their latest straight-to-DVD adventure, Scooby-Doo: Abracadabra-Doo, over 40 years after their first television appearance. The Mystery Machine is a newer model and now has a very annoying GPS, but that's about all that's changed. A look at the relationship between Mike and Sulley during their days at Monsters University -- when they weren't necessarily the best of friends. Mike Wazowski and James P. Sullivan are an inseparable pair, but that wasn't always the case. From the moment these two mismatched monsters met they couldn't stand each other. "Monsters University" unlocks the door to how Mike and Sulley overcame their differences and became the best of friends.