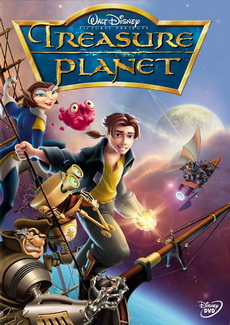 A Disney animated version of "Treasure Island". The only difference is that the film is set in outer space with alien worlds and other galactic wonders. A futuristic twist on Robert Louis Stevenson's Treasure Island, Treasure Planet follows restless teen Jim Hawkins on a fantastic journey across the universe as cabin boy aboard a majestic space galleon. Befriended by the ship's charismatic cyborg cook, John Silver, Jim blossoms under his guidance and shows the makings of a fine shipmate as he and the alien crew battle a supernova, a black hole, and a ferocious space storm. But even greater dangers lie ahead when Jim discovers that his trusted friend Silver is actually a scheming pirate with mutiny on his mind.