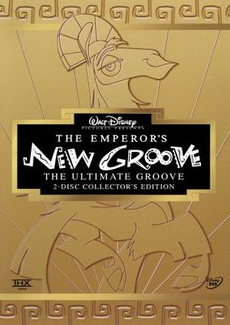 Kronk desperately tries to find ways to impress his Dad, whom he can never please. But when things go wrong, Kronk kicks into comical gear and discovers the true riches in life are his friends and being "true to your groove." Kronk's New Groove (also known as The Emperor's New Groove 2: Kronk's New Groove) is a 2005 American direct-to-video animated musical comedy film released by The Walt Disney Company on December 13, 2005. The film is the sequel and spin-off to the 2000 animated film The Emperor's New Groove, and features reprises of the roles of David Spade, John Goodman, Eartha Kitt, Patrick Warburton and Wendie Malick from the original film, with new voices by John Mahoney and Tracey Ullman. It was also the last film to feature the voice of John Fiedler, who died six months before the movie was released.