As you all know, Madagascar is a huge franchise produced by DreamWorks. It's one of the highest-grossing franchises of all time, and it's the fourth highest-grossing animated franchise. You don't get so much recognition and love for being kinda okay-ish, right? Madagascar, as a series, goes above and beyond to make you feel like a kid again and it's amazing how well thought-out those movies are.

You will fall in love with the characters, they are a rag-tag bunch of misfits who have spent their lives in blissful captivity and are unexpectedly shipped back to Africa. You get so many amazing characters, some are funny, some are serious, some are both, some are just one-note gags, some are stereotypical, touching, thought-provoking, relatable, you just name it. Madagascar is not just for the kids, all the adults should see it too. That's why we are giving you this opportunity to download and enjoy all the Madagascar-related goodness there is to see. You can thank us later! The characters from the animated Madagascar franchise, Alex, Melman, Marty and Gloria celebrate love in this Valentine special. The storyline is predictable, bit it had some sweet romantic moments with the main and minor characters, especially the romance between Gloria & Melman which was really cute. Some of the jokes aren't nearly as funny as the films' humor, but I was given a chuckle here and there. The characters are still likable as they were in the previous films and the voice acting including Ben Stiller, Chris Rock, Sacha Barom Cohen, and others, is solid, but the animation comes across as the best aspect of the entire special. 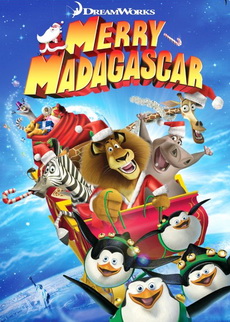 This animated short is about the Madagascar creatures wanting to go back to New York for Christmas, but things get complicated when they meet the amnesic Santa Claus. When Santa and his reindeer crash onto Madagascar it's up to Alex, Marty, Gloria, Melvin, and the penguins to save Christmas. The lemur natives are pelted with lumps of coal every year by Santa, presumably because they are always naughty, as per the original mythology of Saint Nicholas.

The Madagascar Penguins in a Christmas Caper 720p (2005 Lang: nglish) The penguins of the Central Park Zoo have an adventure in the city on Christmas Eve. On Christmas Eve, Private slips out of the zoo for some last-minute shopping. In the city he's mistaken as a cute chew toy by a mean old woman named Nana, who gives Private to her vicious dog, Mr. Chew. On a mission to rescue their penguin pal, Skipper, Kowalski and Rico risk life and flipper as they take on Nana and Mr. Chew with an explosive solution that will leave you laughing out loud. Madagascar 3: Europe's Most Wanted - Alex, Marty, Gloria and Melman are still fighting to get home to their beloved Big Apple. Their journey takes them through Europe where they find the perfect cover: a traveling circus, which they reinvent - Madagascar style. Alex, Marty, Gloria and Melman are still trying to get back to the Big Apple and their beloved Central Park zoo, but first they need to find the penguins. When they travel to Monte Carlo, they attract the attention of Animal Control after gate crashing a party and are joined by the penguins, King Julian and Co., and the monkeys. How do a lion, zebra, hippo, giraffe, four penguins, two monkeys, three lemurs travel through Europe without attracting attention and get back to New York? They join a traveling circus. Their attempts to get back to New York are consistently hampered by the Captain of Animal Control who wants to make Alex part of her collection. Once they make it back to New York Marty, Alex, Gloria and Melman realize that they want to be part of the traveling circus. Madagascar: Escape 2 Africa - The animals try to fly back to New York City, but crash-land on an African wildlife refuge, where Alex is reunited with his parents. The sequel to 2005's "Madagascar", in which New York Zoo animals, Alex the Lion, Marty the Zebra, Melman the Giraffe and Gloria the Hippo, still stranded on Madagascar, start to leave the island. All of a sudden, they land in the wilderness of Africa, where Alex meets the rest of his family, but has trouble communicating with them after spending so much time at the Central Park Zoo. Spoiled by their upbringing and unaware of what wildlife really is, four animals from the New York Central Zoo escape, unwittingly assisted by four absconding penguins, and find themselves in Madagascar. At New York's Central Park Zoo, a lion, a zebra, a giraffe, and a hippo are best friends and stars of the show. But when one of the animals goes missing from their cage, the other three break free to look for him, only to find themselves reunited ... on a ship en route to Africa. When their vessel is hijacked, however, the friends, who have all been raised in captivity, learn first-hand what life can be like in the wild.