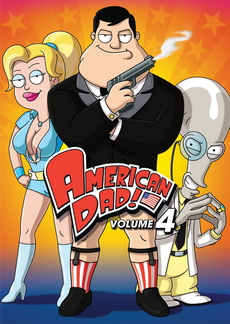 American Dad Season 4 - American Dad!'s fourth season was originally shown in the USA from September 23, 2007, to May 18, 2008. The season consisted of sixteen episodes. The first half of the season is included within the Volume Three DVD box set, which was released on April 15, 2008, and the second half is included within the Volume Four DVD box set, which was released on April 28, 2009. The fourth season consisted of one 2AJNxx holdover episodes while the remaining episodes of the season were from 3AJNxx production line. Because of the 2007–2008 Writers Guild of America strike, there was a shortage of episodes this season. Much like Family Guy, the episodes that were shown during the WGA strike were done so without permission from Seth MacFarlane, since MacFarlane showed support for the writers by not finishing any planned episodes until the strike ended. (Rip by Ahsoka) https://en.wikipedia.org/wiki/List_of_American_Dad!_episodes